A CONVERSATION WITH ACTRESS NAUSICAA BONNÍN

She’s starred in a great deal of theater productions and a whole host of films, but is perhaps best known for her work on television, having become a household name and favorite through her appearances on the small screen. She lives and breathes acting and is endlessly fascinated by her profession. With an eager and determined vision, the actress spoke to us about her projects, her jewelry and much more. [Interview content] She initially took to the stage in her first play at the age of 9, and although she originally wanted to pursue a career as a trapeze artist, she never turned her back on acting. She played Sandra Benjumea in (The Heart of the City) on TV3; Laura Escalada in (Serve and Protect) on TV1, and many other female roles in both films and plays. With a Gaudí Award under her belt, a nomination for the Goya Award for Best New Actress and critics’ recognition for her role in plays such as (The Lady of the Camellias), which was directed by her father in Barcelona, Nausicaa is still as down to earth as ever and gracefully answered all of our questions with a smile.

Impatient, caring and stubborn. The first theater production I was involved in was (Letters to Girls), which my father directed at what was the Teatre Melic in Barcelona. It was the first time I got to experience what it was like to be on stage every night being watched by an audience who felt drawn into the story. In terms of film, (Three Days with the Family) by Mar Coll was both a great personal and professional experience. It was my first leading role among a very young and enthusiastic team, and the film ended up taking us to festivals and being an incredibly rewarding experience. I was guided by a wonderful director and surrounded by colleagues who would become my idols and friends. And I would say has been a key moment in terms of my work in television. I learned so much from that job, but the best thing I took from it was the amazing group of people I worked with who, to this day, are still some of my best friends. No way! When I was really young I wanted to be a trapeze artist (and I get vertigo, would you believe!), and then I decided I wanted to be an actress – I guess because I was seeing it every day. Then, during my teenage years I decided I wanted to try different things and so I started along two different paths[ts1] , until I eventually came back to acting. When I was 20, I became a professional actress and I began to realize that this was something I was meant to do. And here we are! I don’t really have a specific method. With each new project I look at what the role requires and I find a way to develop the character. I love working with the director and finding inspiration from other films, and especially working alongside my fellow cast members, who are hugely helpful in this profession. 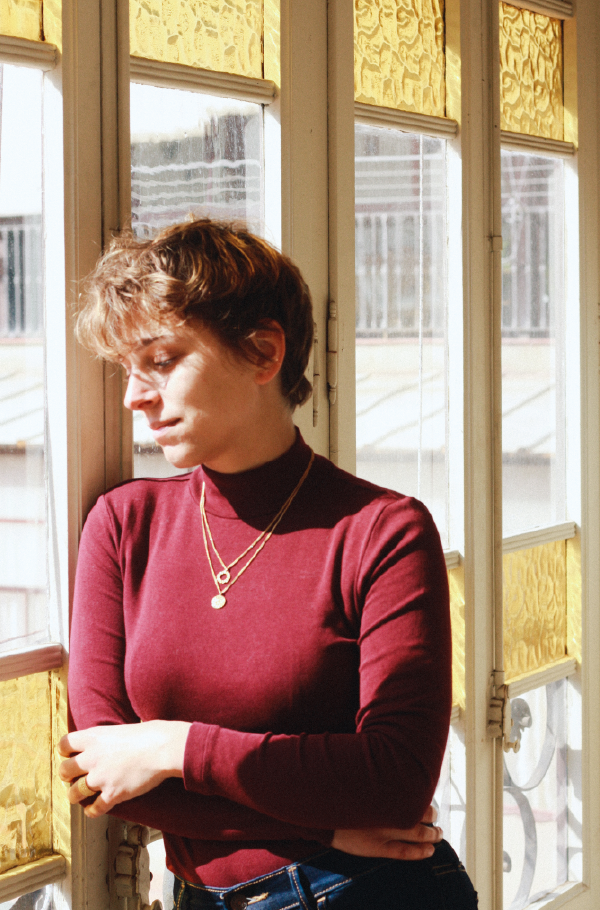 My friends. I learn from them every day and I admire them deeply. Also, I idolize all the women who have fought to be who they want to be throughout the course of history; despite the oppression they faced they never stopped moving forward and they have laid the groundwork for the opportunities we have today. Dance is something I’ve always enjoyed, taking it up sometimes and other times just admiring it from afar. Also photography, reading… Living! What an incredibly great and complex project! What’s more special than trying to nurture an environment where you can learn, love and understand… 24 hours a day, 365 days a year… and try to grow and see growth, accepting your mistakes and failures and learning from them, and helping to create an empathetic dialog with the world. It seems both difficult and magical at the same time within such a fierce and neoliberalist society. I’ve just finished filming with Pau Freixas again, this time for the new series we’re doing for Netflix called (Christmas Holidays). It’s a beautiful and very complex production filled with actresses who I admire greatly. The costume and accessories for each character are hugely important for creating their personality. Every detail in the jewelry, clothing, make-up, hair or props turn that imaginary character into someone with an identity and credibility. Normally I don’t really make an effort. In the second piercing in my left ear I always wear an earring my mother used to wear when she was young, and for the other piercings I’ve had since I was a baby, I sometimes wear hoops or maybe something a bit more special. If I’m getting dressed up I’ll wear a ring, too. But at galas and events it’s another story! I love wearing unique signature pieces, usually earrings or a ring or bracelet. 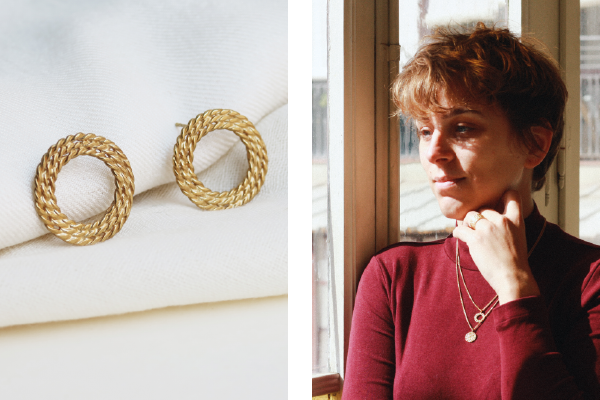 Getting away from the city and disconnecting from intellectual work. I enjoy doing manual work that helps me find a sense of calm, getting together with my friends for different activities and trying new sports! by Alice Rohrwacher. I couldn’t pick just one, so… No comment. Frances McDormand. A living room.

What are your favorite Joidart creations and why? I love the golden necklace and ring from the Mimbre collection by Carme Fàbregas due to its fusion of metal and jewels with a rustic material like wicker. It takes me back to simpler times and more rural settings. The golden earrings from the Constellation collection are also really interesting pieces! I love their shape and texture, and the inspiration they take from celestial phenomena and astrology. I also love the idea of wearing a constellation on your ear, the imperfect spheres, both elegant and informal at the same time.